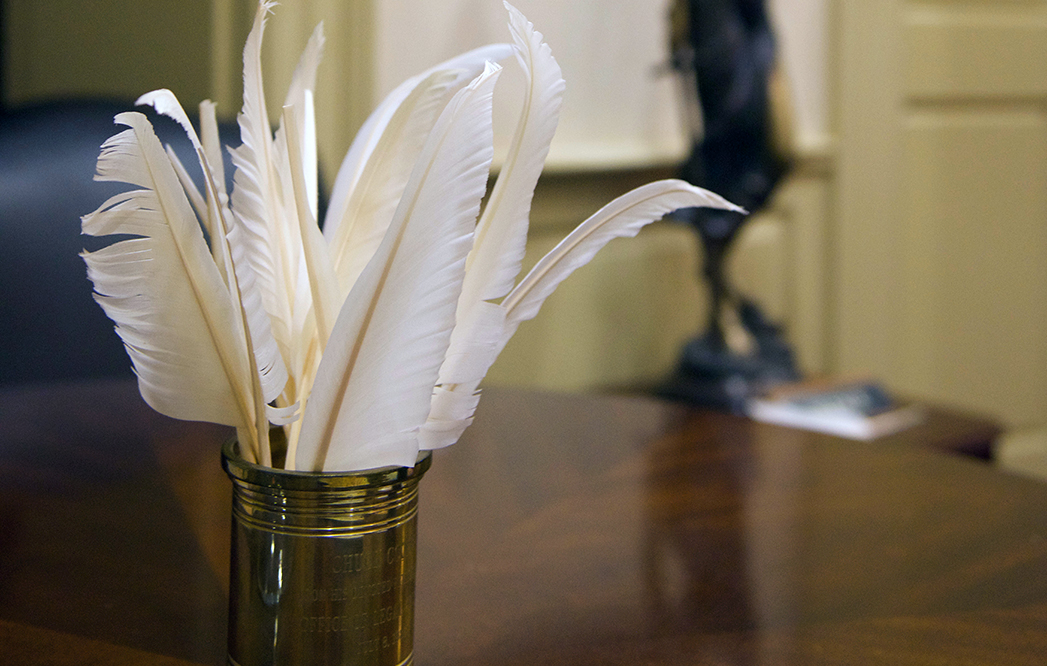 Cooper & Kirk has an active Supreme Court practice. In recent times, an attorney from our firm has presented argument at the Court roughly once per year. Our senior partners have experience litigating at the Supreme Court that goes back decades, and several of our attorneys started their careers as law clerks for one of the Justices. Our familiarity with Supreme Court practice frequently starts paying dividends for clients before a case is even filed, when we work to position cases with an eye to maximizing the chances of a favorable outcome should the matter reach the high court.

Overview We represented New York City and several health care providers and associations in their challenge to the constitutionality of the Line Item Veto Act. The Supreme Court held that the Act violated the Presentment Clause of the Constitution. Mr. Cooper argued the case in the Supreme Court.

Overview We represent Senator Ted Cruz in a challenge to a provision of the Bipartisan Campaign Reform Act, and FEC regulations implementing it, which impose a $250,000 cap on the amount a federal candidate may raise, after an election, to pay down loans that the candidate personally made or incurred before the election for the benefit of the campaign. Because this restriction burdens a candidate’s ability to spend his own money to finance his campaign, the lawsuit claims that it is unconstitutional under the First Amendment.

Overview We represented Boeing in a dispute with the Department of Defense over the government’s default termination of a $4.8 billion contract to build a carrier-based stealth attack plane for the Navy. We successfully persuaded the Supreme Court to throw out a ruling sustaining the default termination that could have forced Boeing and General Dynamics to pay nearly $3 billion to the Government.

Overview We represented the Winstar Corporation and the Statesman Savings Holding Corporation in claims against the United States for breach of its contractual obligations to our clients arising out of their acquisition of failed savings and loan institutions from government regulators. We represented these clients in the Court of Federal Claims (where the United States was found liable), in the Federal Circuit (affirming the findings of liability after rehearing the case en banc), and in the Supreme Court. Mr. Cooper argued the case before the Supreme Court, which upheld the findings of liability and remanded the cases for determination of damages by the lower court.

Overview We represented American Life & Casualty Company in a suit involving a long-term lease of an office building. The court of appeals had ruled that the recent assignment of the lease revived the 1917 contract’s original gold clause and thus required dramatically higher rental payments by American Life. The Supreme Court granted our petition for certiorari, vacated the decision of the court of appeals, and remanded the case for reconsideration in light of a statute that addressed the claim against American Life.

Overview We were co-counsel to the Oklahoma City Board of Education in this school desegregation case. The Supreme Court’s decision established the standard that school districts operating under a federal desegregation decree must satisfy to be entitled to termination of federal court supervision.

Overview We represented the National Rifle Association Political Victory Fund in an action brought by the FEC alleging violation of campaign contribution regulations. The court of appeals agreed with our position that the composition of the FEC violated the separation of powers. The Supreme Court ultimately dismissed the appeal after argument, agreeing with our argument that the FEC did not have independent litigating authority to challenge the decision of the court of appeals. The case was argued before the Supreme Court by Mr. Cooper.

Overview We represented the proponents of Proposition 8, a 2008 California ballot initiative that amended the California Constitution to state that “only marriage between a man and a woman is valid or recognized in California.” We conducted a two-and-a-half-week trial during which numerous experts testified and subsequently argued the case in the Ninth Circuit Court of Appeals and the United States Supreme Court.

Overview The Providence, Rhode Island School Board retained us to seek Supreme Court review of lower court rulings holding unconstitutional the practice of opening public school graduation ceremonies with a nondenominational invocation by clergy. The case was argued by Mr. Cooper, and the Supreme Court affirmed, 5-4, the lower court decision.

Overview We represented the National Rifle Association in its challenge to the constitutionality of the Bipartisan Campaign Reform Act. The statute prohibits corporations from airing television and radio advertisements mentioning a federal candidate in the 60 days prior to an election. Our suit sought to invalidate this prohibition on First Amendment grounds. In a 5-4 decision, the Court upheld the statute.

Overview We successfully represented the Mille Lacs Band and certain individual members seeking to enforce hunting and fishing rights on certain lands pursuant to an 1837 treaty with the United States. In a 5-4 decision, the Supreme Court upheld a declaratory judgment recognizing those rights and established several important principles of general applicability to Indian treaty litigation. We assisted trial counsel in briefing the case and in coordinating litigation strategy with other parties, including the Solicitor General’s Office, which entered the case in support of our position.

Overview We represented several members of Congress in their challenge to the constitutionality of the Line Item Veto Act. Although the district court held that the Act was unconstitutional, the Supreme Court declined to reach the merits of the members’ claim, holding that they did not have standing to bring this challenge.

Overview We represented the State of Alabama in the Supreme Court in a case challenging the State’s corporate franchise tax as it applied to out-of-state corporations. As a threshold matter, we maintained that the Court lacked jurisdiction over the State of Alabama under the Eleventh Amendment. On the merits, we urged the Court to abandon its Dormant Commerce Clause jurisprudence on the ground that it has no foundation in the Constitution. Mr. Cooper argued the case.

Overview We represented a private party seeking the disclosure of a diplomatic communication between the United States and Great Britain under the Freedom of Information Act. A divided panel of the Ninth Circuit had ordered the release of the document, and the Supreme Court granted certiorari. Within a week after receiving our merits brief, the United States voluntarily released the communication and thus rendered the case moot.

Overview We represented a group of technology companies as amicus counsel in a case concerning the patent-eligibility of computer-implemented inventions. We argued that such inventions should not be subjected to restrictive patent eligibility rules, which could incorrectly render many such inventions ineligible for patent protection under the judicial exception for “abstract ideas.”

Overview We represented 84 United States Senators and Members of the United States House of Representatives as amici arguing that a World War I memorial cross standing on public land did not violate the Establishment Clause.

Overview As Assistant Attorney General for the Office of Legal Counsel, Mr. Cooper represented the Secretary of the Department of Health and Human Services in an action challenging the validity of regulations promulgated under the Rehabilitation Act concerning health care for handicapped infants.

Overview We filed an amicus curiae brief on behalf of a group of savings and loan associations and related holding companies arguing that it is unconstitutional for the federal government, even by act of Congress, to breach a contract providing payments to owners of low-income housing.

Overview We represented multiple United States Senators and Representatives as amicus counsel in this challenge to the IRS’s interpretation of the Affordable Care Act as providing subsidies for health plans offered by federally-managed health insurance exchanges. We argued that the IRS’s reading of the statute was inconsistent with its text and violated the separation of powers.

Overview We represented the Republican Governors Association as amicus counsel in former Governor Robert F. McDonnell’s successful challenge to his conviction for bribery. We argued that regardless of the propriety of Governor McDonnell’s actions, the theory of bribery under which he was convicted represented a dangerous threat to federalism and individual liberty.

Overview We filed an amicus brief in challenge to constitutionality of the Affordable Care Act arguing that the individual mandate exceeded the scope of congressional authority and was not severable from the rest of the act.

Overview The Court held that a money judgment that constitutes income is taxable to the litigant, including any amount paid to an attorney as a contingent fee. We had filed an amicus brief on behalf of Taxpayers Against Fraud Education Fund, urging the Court not to decide the separate question of whether the entirety of a qui tam relator’s award, including any portion paid to an attorney as a contingent fee, would be taxable to the relator. Citing our brief, the Supreme Court specifically refrained from reaching this issue. 125 S. Ct. at 871.

Overview We filed an amicus brief on behalf of Urban Communications, a minority-owned telecommunications company. At issue in the case was the validity of the FCC’s revocation of Nextwave’s spectrum licenses for wireless services, which was then valued at over $4 billion. Nextwave had failed to make timely payments to the government and filed for bankruptcy. Although the Bankruptcy Code prohibits the government from revoking regulatory licenses “solely because of nonpayment,” the FCC claimed its revocation was appropriate because it had non-pecuniary regulatory interests at stake. Our brief demonstrated that, in fact, its monetary interests animated the government’s course of conduct at every phase of the litigation. Nextwave prevailed before the Court.

Overview We filed an amicus curiae brief on behalf of the State and Local Legal Center (representing the National Association of Counties, the U.S. Conference of Mayors, the National League of Cities, the National Governors’ Association, and related organizations) arguing that the overtime compensation provisions of the Fair Labor Standards Act should not be interpreted to require state and local governments to enter into collective bargaining with public employees where state law does not permit such an arrangement. Our brief was cited by the Court.

Overview We submitted an amici curiae brief on behalf of a group of scholars, scientists, economists, and electrical engineers providing the Court with an explanation of how electrical energy flows onto a power network and across the national grid. This explanation, which was cited by both the Court and the dissenting opinion, provided the central underpinning for the Court’s decision upholding the jurisdiction of the Federal Energy Regulatory Commission over retail transmissions of electricity.